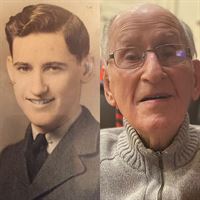 Reginald P. McGrath, of Miramichi, passed away peacefully at home surrounded by his family on Monday, January 23, 2023, one month short of his 98th birthday.

Born in Newcastle, he was the son of the late William and Mary-Ellen (Ryan) McGrath. He was a member of St Mary's Roman Catholic Church. He was also a member of the Newcastle Legion Branch No.10, The Wing in Chatham, and the Knights of Columbus.

Reg was a military veteran who enlisted with the Royal Canadian Air Force in 1943. He was assigned to an air base in Leeming Yorkshire, England, with the 427 Lion Squadron and served in the Bomber Command, where he remained until the end of WW II. He received many honours and was awarded several medals. He went on to work as a firefighter at the Canadian Forces Ammunition Depot Renous, and various other jobs.

Besides his parents, he was predeceased by his beautiful daughter, Carolyn (McGrath) Brideau, and his brother Donald McGrath.

Visitation will take place at Northumberland Funeral Home on Friday, January 27, 2023, from 7 to 9 pm. Mass of Christian Burial will be celebrated on Saturday, January 28, 2023, at 11 am, from St Mary's Roman Catholic Church, with Father Peter officiating. Interment will take place in the church cemetery at a later date.

You may view Reg's tribute video at the link below:
https://www.tributeslides.com/tributes/show/TJZHWPRB7LL6NR8F

As expressions of sympathy, donations may be made to the Extra Mural Program.

Funeral arrangements are in the care of Northumberland Funeral Home & Crematorium,102 Pleasant St, telephone (506) 622-7741. here your loved one never leaves our care.
Back to List