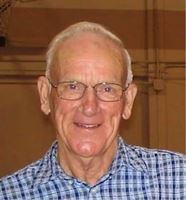 Frederick Thomas Corcoran of Losier Hall, formerly Douglasfield/Nelson, NB, passed away peacefully at the Miramichi Regional Hospital on Sunday, February 7th, 2021 at the age of 85.

He is survived by his adoring wife of 67 years, his sweetheart, Betty (Blacquier) Corcoran, whom he loved to no end. He is also survived by his children Jerry (Martha), Nancy (Rick) Mullin, Danny (Diane), Helen (Edward) Barrieau, and John, and his 11 grandchildren Tammy, Jesse, Karla, Kevin, Krystal, Amy, Bradley, Ashley, Riley, Sean and Alex, as well as his 14 great grandchildren.

Besides his parents, Fred is predeceased by his brother Perley Corcoran and sister Frances Connick.

Fred worked in building supplies for Burchill’s and then Lockhart’s Beaver Lumber until his retirement at 65 years old. He was an avid guitar player and was a member of several bands throughout his life, jamming and playing for local benefits and events. His love of playing guitar carries on in several of his children and grandchildren.
Fred also enjoyed fishing, hunting, birding, and woodworking. He could be found at the local weekend farmers markets selling his handcrafted boxes and birdhouses.

Fred’s family would like to offer special thanks to the nurses and staff of Brennan Court, Losier Hall for their exceptional care.

At his request, there will be no visitation or funeral service. Interment will take place in St Patrick's Cemetery at a later date.

In lieu of flowers, donations may be made to Losier Hall or to a memorial of one's choice.