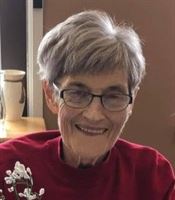 It is with heavy hearts that we announce the passing of our mother, Laurina Kelly, wife of the late Wayne Kelly, on August 16, 2020 at the Doctor Everett Chalmers Hospital in Fredericton, NB. Laurina was born on June 21, 1948 in Miramichi to the late Harry and Isabella Underhill of Blackville, NB.

Laurina will always be remembered by her three children: Gregory (Misty) Kelly of Fredericton, Perry (Brenda) Kelly of South Nelson and Angela (Jason) Tozer of Lincoln. She was blessed with seven grandchildren whom she adored: Jackson, Lauren, Ryan, Logan (Tozer), Zachary (Kelly) and Ethan and Emily (Kelly). And one great grand-child, Jace (Jackson & Reyna). As well as several close nieces and nephews.

She will be deeply missed by her brother Stephen Underhill of Ottawa, and her sisters Caroline Underhill of Toronto and Reona (David) Turcotte of Blackville. Recently having niched the phrase of “The 4 Winds”

Laurina was a dedicated mother and wife, first and foremost; treasuring her children and embracing each moment with them. She especially cherished her role as Nanny. Her husband, Wayne was the love of her life. Since the moment their eyes first met, he has never left her heart. She cared deeply for her family and neighbors, regularly bringing meals to the home of sick neighbors, CWL functions and card parties. She did this not out of obligation, but because of who she was. Her love for children was evident in her efforts to ensure children she met were noticed, acknowledged, smiled upon and sometimes, given a loonie or toonie. As a homemaker, she could be found in the kitchen preparing a meal for visitors or whipping up a tasty dessert to share with family and friends.

Private family visitation will be held on Wednesday, August 19, 2020, followed by a Mass of Christian Burial at 2 pm at St. Raphael’s Catholic Church, Blackville, NB.

In lieu of flowers, memorial donations may be made to the Heart and Stroke Foundation or Canadian Cancer Society.

Online condolences may be left at https://www.northumberlandfh.com/obituaries/