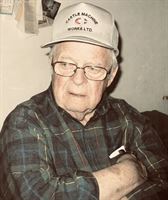 William Arthur “Bill” Allen of Miramichi went home to be with his Savior Jesus Christ in the early morning hours of Monday, February 3, 2020 at the Miramichi Regional Hospital. Bill was born on December 18, 1929 in Miramichi to the late Anna Crocker Allen and Max Allen. He recently celebrated his 90th birthday surrounded by his family and many friends.

After World War II, Bill joined the North Shore Regiment Auxiliary and although he trained and served, he was not involved in any conflict. He spent several years in Brantford, ON as a young man where he attended community college and learned the trade of welding. Bill will be remembered as the face of Castle Machine Works, the business he owned and operated on the Miramichi since 1968. He poured his heart and soul into “The Shop” and was rarely seen without his trademark Castle Machine Works hat on his head.

Bill is also survived by his longtime companion Dorothy Creamer and a host of lifelong friends and acquaintances.

Besides his parents, Bill was predeceased by his wife Rosemary and his son Jackie.

Bill was a hard worker and could do just about anything with his hands. In addition to being a welder, he was also a skilled carpenter and built many things, including model ships and planes. He had a love for steam trains and enjoyed building them and riding them on tracks. Bill was an artist and was known to “doodle” on even the tiniest scrap of paper, and his oil paintings were beautiful works of art. Bill was a great storyteller and kept track of many of his stories by writing them down from memory. He was witty and funny and always had a joke at the ready. He was kind and generous, and he never met a stranger. Bill was a good man and he will be forever loved and missed.

At Bill's request, there will be no visitation. A Celebration of Life will be held on Monday, February 10, 2020, at 1 pm, from Northumberland Funeral Home Chapel. Interment will take place in Miramichi Cemetery later in the spring.

As expressions of sympathy, donations may be made to a memorial of one's choice.